My Colorado elk hunting public land experience turned out to be amazing.  I was blessed to get a large 6×5 bull and my hunting partner got a 6×4.

I built up 8 years of preference points in order to hunt the Uncompahgre (unit 61) in Colorado. Some times it simply feels good to know that a year of planning, researching and preparation can pay off.

It came down to the last morning and my body was worn out. Mentally, I had almost conceded that this was simply not going to be my year. I had seen and heard many elk and even missed a 6×6 bull on day two. I had my chances and I thought I had blown it.

However, this hunt was dedicated to my grandfather, so I mustered up all my energy and gave it one more try.

On the evening before the last day, I ran into some fellow Texans and they pointed me in the direction of  several bulls they had seen. That next morning at sunrise, the majestic bugling began. I could hear more than 7 bulls and we started communicating back and forth. A couple bulls got close, but they just wouldn’t fully cooperate.

It was 8:30 am and I faced the most critical decision of the entire hunt. Should I leave these bulls and head back to the saddle where I had missed a bull on the second day, or stay and see if I could make something happen. I chose to leave.

By now its 9:30 am, and based on previous experience, it was really rare a bull would be out in a saddle area similar to where I was headed. However, this was the coldest day of the entire trip and weather was moving in. My hope was the colder temperature would keep the elk out feeding longer.

Another advantage was my hike in would be much quieter than normal because the ground wasn’t frozen like on previous trips in, it was wet. This eliminated the excessive crunching noise of my size 14 boots and would be absolutely key to me encountering a bull.

Inside I wanted to move at a rapid pace because I was feeling the urgency of getting to the saddle. Fortunately, I kept it slow and steady, hunting the whole way.

As I tediously gazed left to right proceeding slowly through the mixed pine and aspen, I noticed some movement.

There was an elk about 80 yards away. I could see his entire massive body, but his head was behind a tree. I couldn’t tell how many points he had, but I knew he was legal (as a spike was legal in this unit).

“Luck is what happens when preparation meets opportunity.”

When I hike in I always keep my shooting stick extended and ready to shoot from a standing position. This paid off big time. However, just as I laid my rifle on the stick, the bull raised his head and stared right at me.  Now we were frozen, but I couldn’t attempt to move my eye down to the scope. I knew if I moved at all I would be busted.

We stared at each other for what seemed like an eternity. Then he put his head back down and continued grazing. This was my chance. I lowered my eye to the scope, took a deep breath, exhaled, and pulled the trigger. He dropped.

As I watched him lie still,  I noticed another 5×5 bull about 20 feet to the left of him, and then another 4×4 off to his right. I had never even seen them until now.

After I was certain he was dead, I stood there in the eerily silent woods just taking in the moment, reflecting on the last 7 days and the year building up to it.

Inside I screamed with excitement and felt my grandpa was in some way celebrating with me.

The emotion and memories of my grandpa and our many hunting adventures was overwhelming. There was such an empty void because I knew I wasn’t going to be able to call him and share the hunting story.

I couldn’t believe I did this with only 2 hours left on the last day and only 1/3 of a mile from the trail head.

Then I fell to a knee and prayed. I thanked God for watching over us the entire trip and for providing us with two glorious bull elk.

All the hard work, preparation and perseverance actually ended in success. My Colorado elk hunting public land experience was over.

“The mere fair-weather hunter, who trusts entirely to the exertion of others, and does more than ride or walk about under favorable circumstances, and shoot at what somebody else shows him, is a hunter in name only. Whoever would really deserve the title must be able at a pinch to shift for himself, to grapple with the difficulties and hardships of wilderness life unaided, and not only to hunt, but at times to travel for days, whether on foot or on horseback, alone.” – Theodore Roosevelt 1901

Do you have plans for Colorado elk hunting public land? 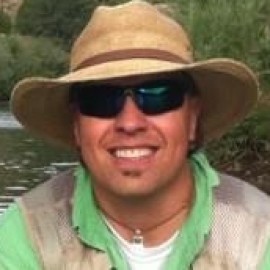